Featured on our Founding Fathers of Modern Phoenix tour in 2009 and again in 2017, when it joined the National Register of Historic Places.

Executive Towers was the tallest skyscraper in Phoenix at the time of its construction in 1962-63. Aerial photos from the time show Uptown Phoenix as still possessing vast dirt lots interspersed among a few midrises and sprawling parking lots.

Designed by the talented yet formally unschooled Navy Seabee Alfred Newman Beadle at the young age of 33, this 22-story apartment complex in Midtown Phoenix is truly one of a kind and much beloved by Phoenicians.

The 160-apartment building would later convert to condominiums under the care of Moss Development Corporation of Chicago in the year 1971. 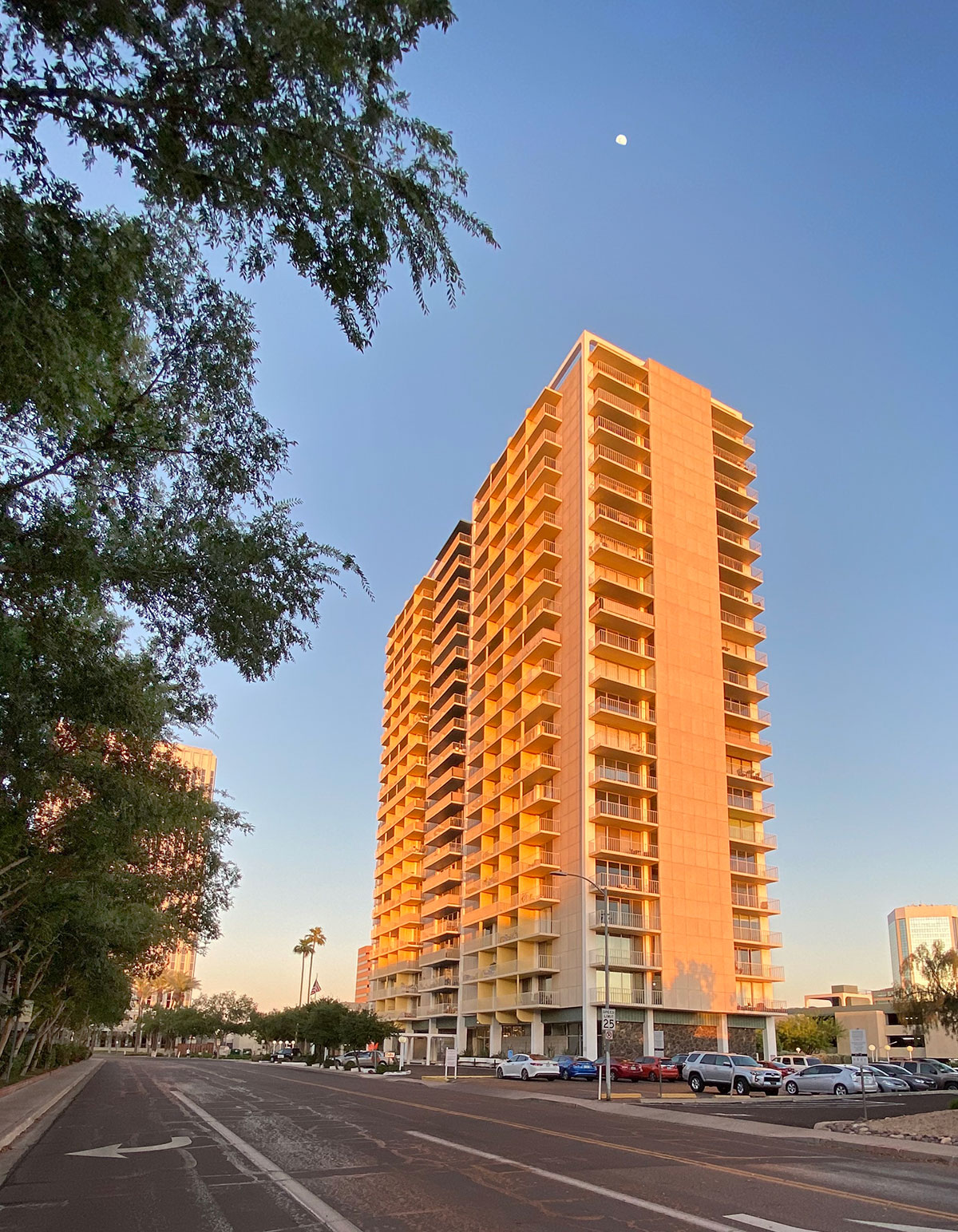 Copies of the vintage brochure pages shown above were digitally restored by Modern Phoenix and are on display in the Executive Towers lobby for all to enjoy.

The property's strict angles are periodically softened by curves in the form of cheerful "Beadle Balls" -- a favored lighting form used by the architect. 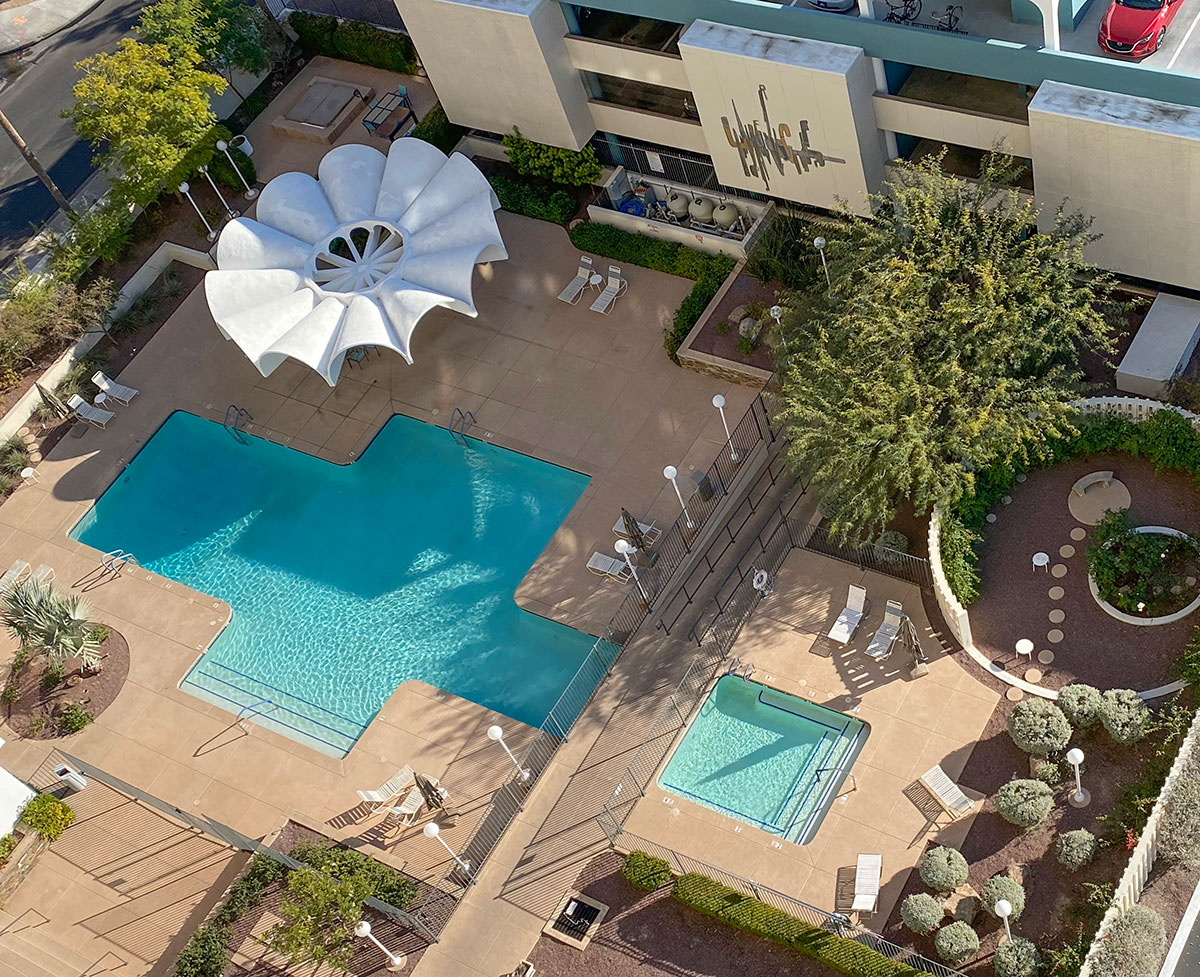 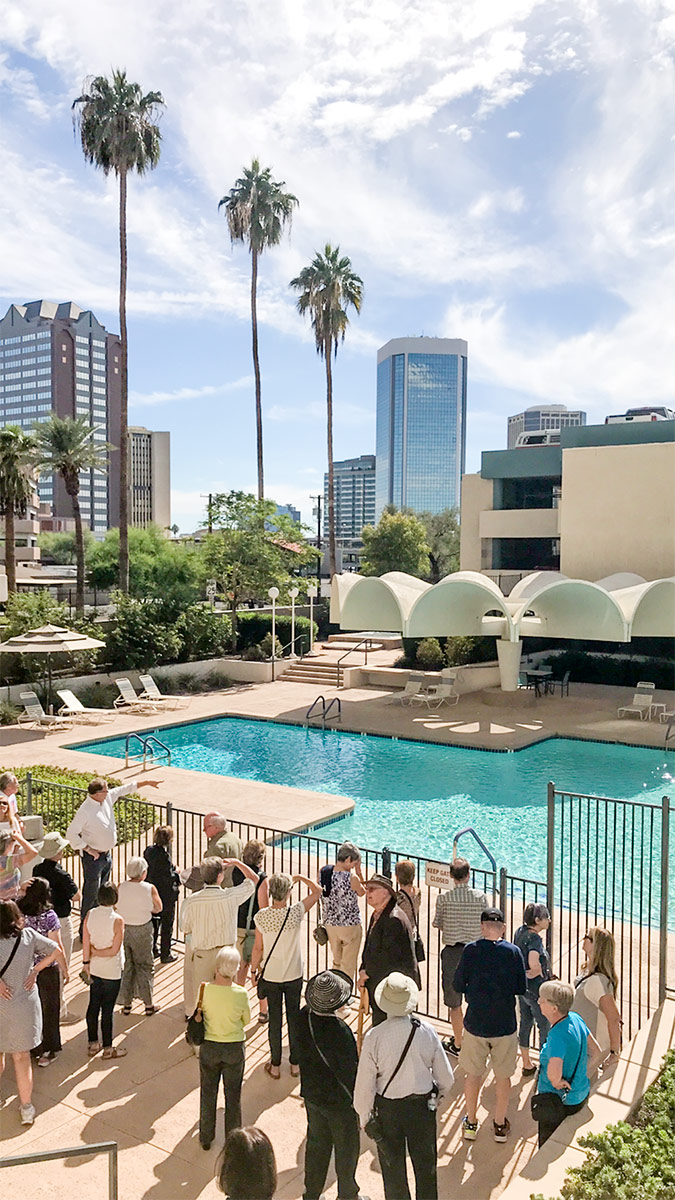 The generous north-facing porte-cochere provides a grand entrance for visitors, and sets the tone for the curved columnar supports found as accents throughout the property -- most notably atop the penthouse and parking garage. Beadle used port-cocheres at the Safari Hotel in Scottsdale and experimentally in homes for Paradise Gardens.

Beadle took great care to integrate architectural arts throughout the plan from the start. Sgraffito artists Milton Tuttle and his aide Olin Sherrod were able to beat the Arizona heat and carve their low-relief plasterwork within a few hours of open working time. The work is cryptically entitled "207", after the mortgage title. Mr. Tuttle's work can also be found on the old PBSW Furniture store on 7th and Indian School within walking distance. Is it possible for a parking garage to be award-winning? Somehow Beadle's touch made it so.

The remaining third of the pool area contains a small rose garden encircled by a meandering, fenestrated block wall. A known curmudgeon, this is perhaps one of Beadle's most overt acts of whimsy..

The lobby entrance is graced by a monumental floor-to ceiling installation by Glassart Studio of Scottsdale, one of the leading glass artisans of the 60s and 70s. The glass is faceted in the medieval tradition, which refracts light in dazzling ways.

The leisure program and promenade toward the garage becomes clear from above.

The structure's surface materials are highly expressed and provide relief, including these modular stone tiles that leave ragged edges proud

Executive Towers, despite its strict palette of architectural forms, is rich in texture and materials. These tiles appear to be cast concrete, and undulate in a corrugated pattern along the ground level exterior walls.

Turquoise and sage Venetian glass mosaic tiles are set at freize-height beneath the shaded cantilever of the main structure, reflecting the verticality of the other midrises around it.

A similar aqua Venetian tile was used on the exterior of Beadle's own 1958 home on White Gates Drive, and at the Kramlich Residence.

As complete and surprising contrast, ruddy volcanic stone was used on the
western face of the building.

The second streetside entrance is less grand, but no less attractive. Note how the building seems to lift off the ground -- a classic Beadle touch to make a 22-story building appear to float on air. 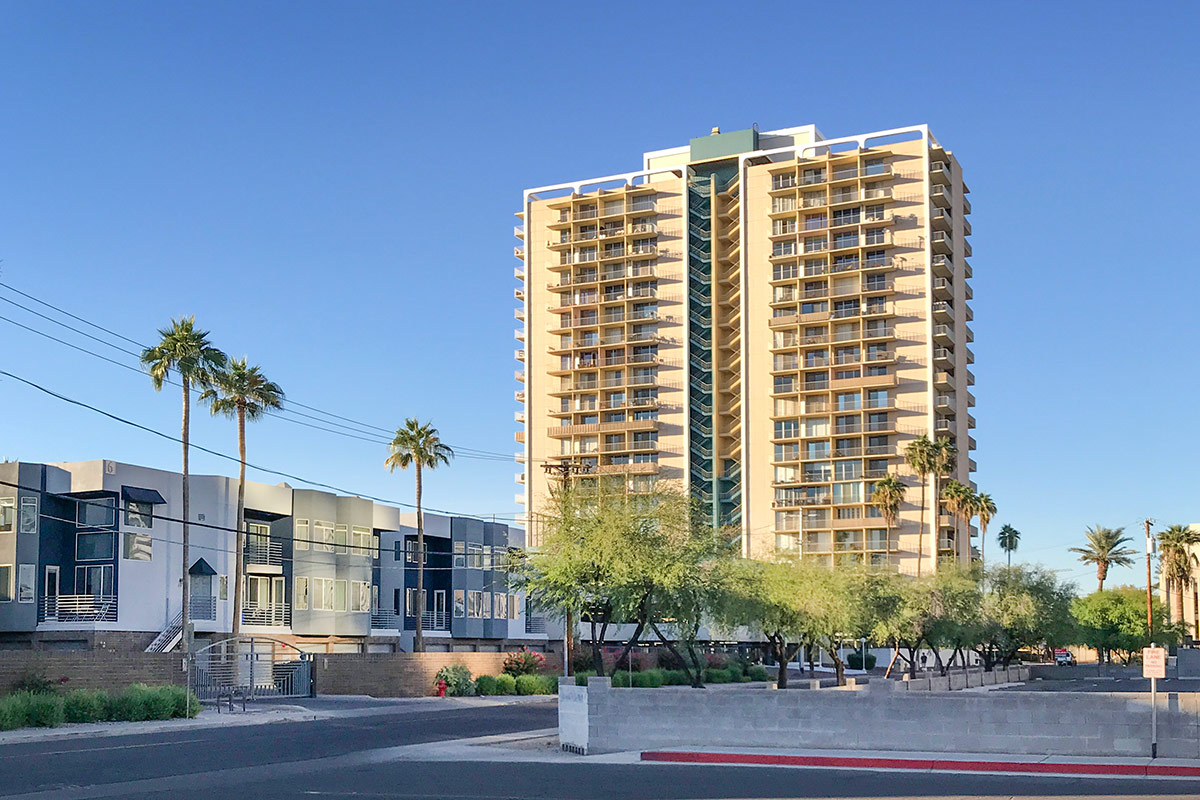 In 2017 the property underwent substantial improvements, including a refresh of the color scheme, shown in progress above. Several swatches were discussed in consultation with architect and former Beadle employee Ned Sawyer. 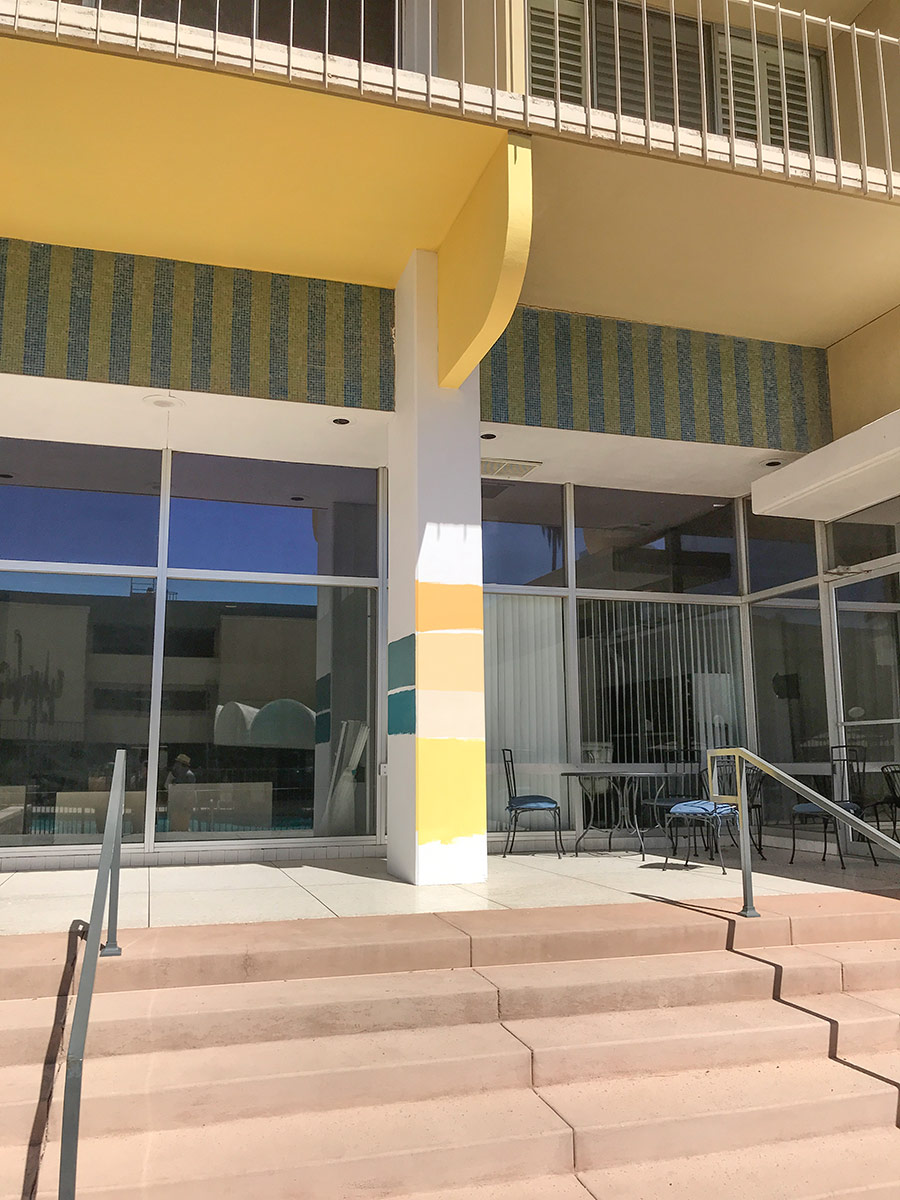 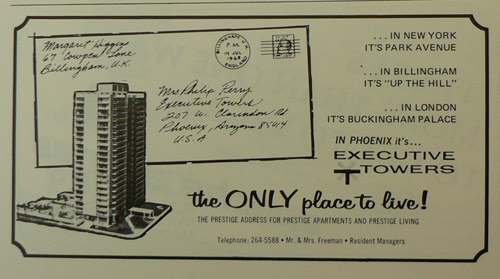 Al Beadle with developer Stan Dru on the balcony of Executive Towers, published in Arizona Living magazine. Stan Dru taking in a view from across the city, below.

Roger Brevoort and Donna Reiner wrote the nomination for the National Register of Historic Places, and ET was added to the Register in 2017. Stan Dru was able to attend the dedication of his historic building. 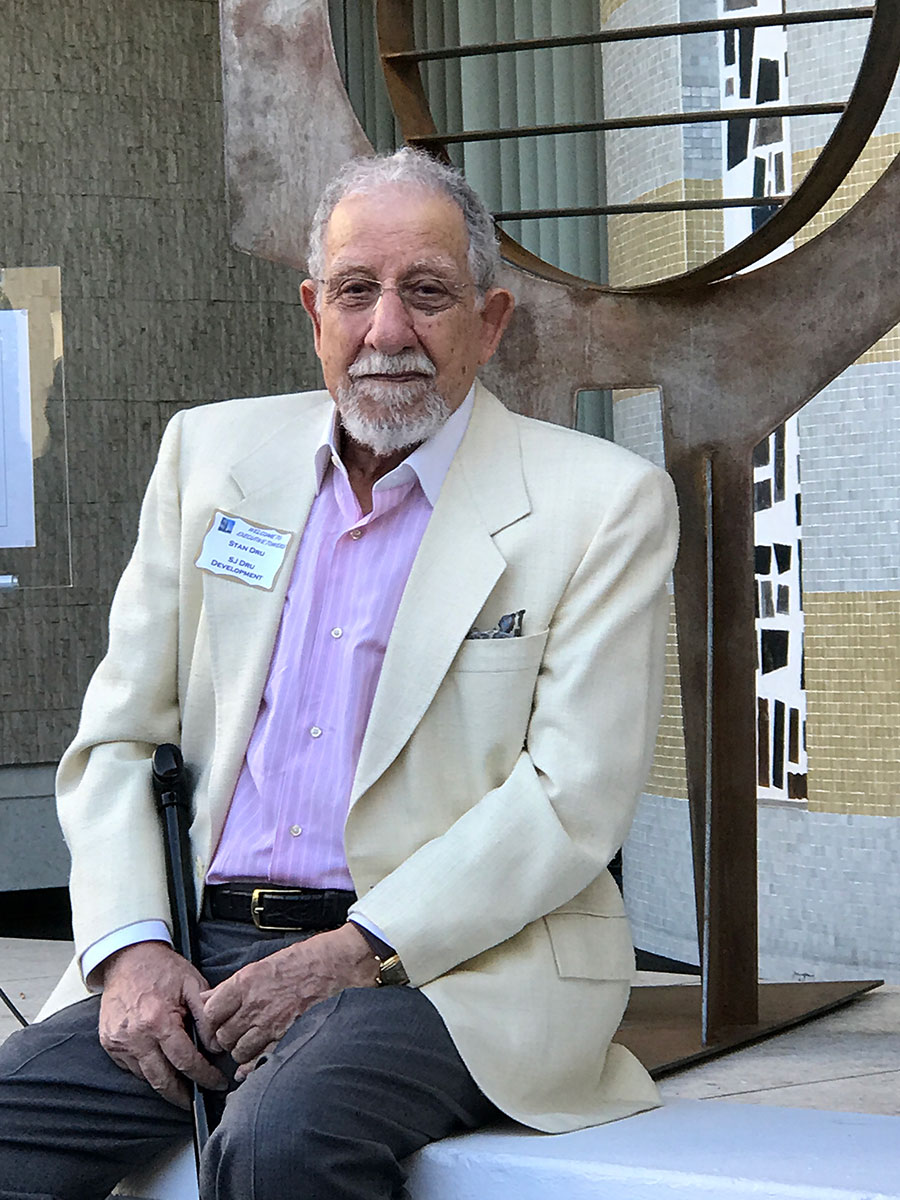 During the nomination process, the blueprints were found (in the boiler room!) and have been consolidated in the Beadle Archive at ASU Libraries.

"Historical Property Information Form and Application" by Roger Brevoort and Donna Reiner, 2017. Ask for the brochure based on this nomination at the ET front desk!