Tearing Down the Arcadia/Camelback Legacy

By Rachel Simmons, your modern design diva
Photos and captions by Alison King Arcadia has been a desirable Phoenix neighborhood since it emerged as an exclusive subdivision consisting of larger estate homes in 1919. Born from the development of the Salt River Reclamation project, Arcadia residents were encouraged grow lawns and plant citrus trees to add value to their property. As a result, the area became a lush green orchard speckled with high-end rambling ranch homes. Marketing itself as an oasis at the foot of Camelback Mountain, the neighborhood boasted of the large green lots and peaceful quiet of its streets. 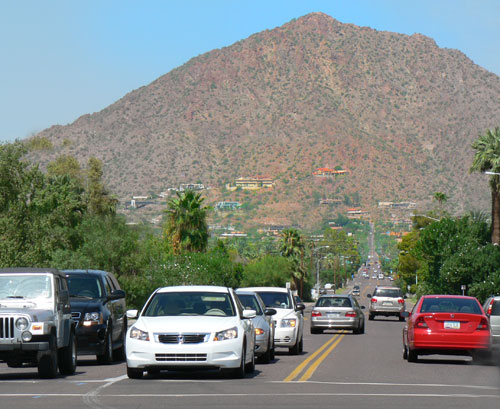 The Arcadia-Camelback Mountain Neighborhood Association lists several enviable points of Arcadia in their mission statement that describe some very distinct character defining features: generous setbacks, wide side yards, understated homes, broad lawns, and historic citrus trees. In addition to these larger estate homes, the 1950s saw an emergence of three and four bedroom modern ranch homes to the area. These modest houses occupied smaller 1/3 to 1/4 acre lots and were constructed by some of the larger local developers such as Allied Homes and Del Trailor. In addition to these developer ranches there were also many larger modern ranch homes built that have become significant architectural landmarks.

Before diving into a discussion regarding Arcadia’s architectural gems, we must discuss the subject of teardowns, which was what originally prompted this article. We (Modern Phoenix, Valley Modern Design, The Arcadia-Camelback Neighborhood Association, and many more interested parties…) are extremely concerned that the Arcadia we know and love—the Arcadia that means so much to the history, culture, and landscape of this town—is soon to be lost forever. 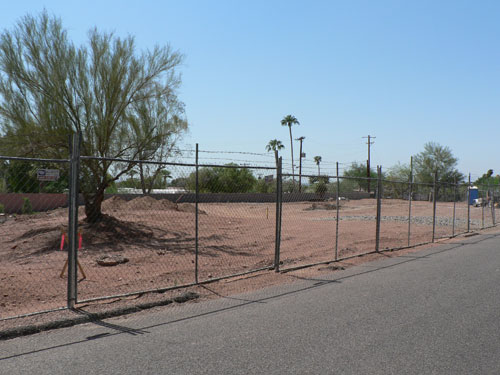 A single-story home on the slope of Camelback mountain was recently bulldozed.
There has been much written about the teardown trend happening in Arcadia, and neighborhoods like it across the country. Thanks to the real estate bubble experienced nationally over the last several years teardowns have become a significant issue in historic preservation circles. So much so that the National Trust for Historic Preservation has published several articles and urges for action on the subject. They cite four main categories of impact, or ‘cons’ if you will, including: loss of historic houses, loss of livability, loss of community character, and loss of diversity.

The loss of historic houses gets our immediate attention and is generally the focal point when we concern ourselves with historic preservation, but the following three categories can be the most damaging, and what we are seeing quite a bit of in the Arcadia area. The neighborhood’s original homes were built at an average of 14 feet tall so as to maximize mountain views and they were designed to take advantage of the citrusy lush landscape by reserving as much of the property as possible.

Today, these houses are razed because the value of the land has exceeded (monetarily) the value of the home, and what springs up in its place is absolutely criminal. They are cookie-cutter, stucco box McMansions that maximize every zoning regulation written. With a bigger-is-better approach, the lots are completely covered, blotting out the vast green vistas. Also, the new-builds often do not conform to the low roofline precedent but are built with second stories (and sometimes on a built-up lot!) destroying mountain views and the traditional look and feel of the neighborhood. The architectural character of these homes also misses the mark established in this neighborhood circa World War Two and is more reminiscent of the Mediterranean than the Sonoran desert. The once regal and rambling postwar ranch homes seem dwarfed and defeated next to these manifestations of machismo. 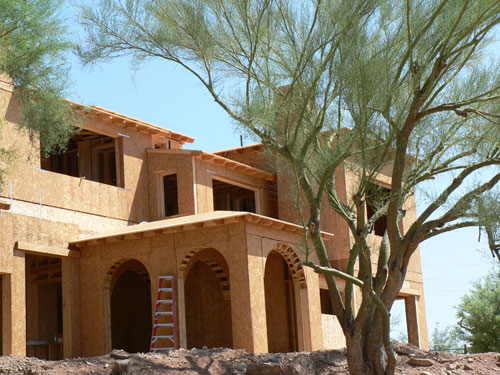 Camelback Mountain is a particularly vulnerable area, with several vintage Al Beadle designed homes, including his personal White Gates residence, below, which was one of Arizona's Most Endangered Historic Places in 2008. The designation helped bring positive publicity and neighborhood education. It also assisted in receiving aid for the home's restoration. The home shown above is being built two lots down the street. 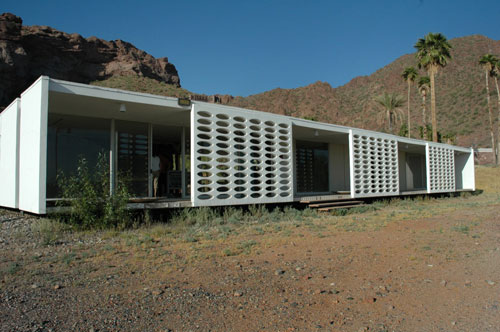 Photo: Erica Lucci
But why do we care about the character and history of Arcadia? What is wrong with razing the entire lot of old and outdated ranches and revitalizing the sought after area with contemporary architecture chock full of the latest and greatest design concepts and technological advancements? Why don’t we let property owners do what they wish with land they rightfully own? I read one local columnist argue that Arcadia’s prime location attracts famous people to the Valley and if we don’t allow them to exercise freedom with the properties and alter the homes to their liking, they will look to other cities. Let them! We want to attract people to the Valley that care for our unique history and want to preserve our cultural landscape.

For many years the residents of Arcadia preserved the look and feel of their neighborhood by renovating their homes appropriately and adhering to a compatible design. Recently investors have swooped in, razed and remodeled in speculation, and sold to area newcomers unfamiliar with the community’s character. The highest and best use of a parcel of land isn’t always what can bring in the highest price tag. Arcadia is coveted not because of these shiny new homes but because of the incredible location, architectural character, and the lush, cool, green landscape. If we allow the area to be slathered with stucco much of this will be lost and the value of the land may actually decrease.

The Parker home, a low-slung red brick beauty designed by Ralph Haver.
Original mid-century architecture is growing in appeal and increasing in monetary value. More and more intelligent people are seeking out modern properties and foregoing real estate searches among the deep seas of beige we have built up in the last twenty to thirty years. They want meaning and originality in their architecture. They long for character and class. The mundane mess of matchsticks and masking tape that we build today is no longer making headlines, and hence, not adding to the value of Arcadia.

According to old address directories, this Arcadia address was famous Phoenix developer Del Trailor's home in the 50s.
So, we know much has been said about the teardown trend and why we should not raze these homes, but what makes them so special? Mid-century ranch houses are important because of their representation of Phoenix history, technological advancement, and cultural conditions. They represent the Valley’s evolution from a one-horse town to the metropolis it is today. Arcadia’s stock is significant because of the level of quality and uniqueness they possess. There are many postwar neighborhoods in the valley, several that have been designated by historic agencies and saved, but Arcadia is unique. Its rarity lies in that it is not entirely a tract home development; many of these homes are one-of-a-kinds designed and built with all of the modern ranch characteristics representative of the era: screen block walls, large expanses of glass, angled rooflines, and low horizontal emphasis. Each one of these homes offers a unique floor plan and material composition that when combined create an architectural message not duplicated elsewhere in the valley. 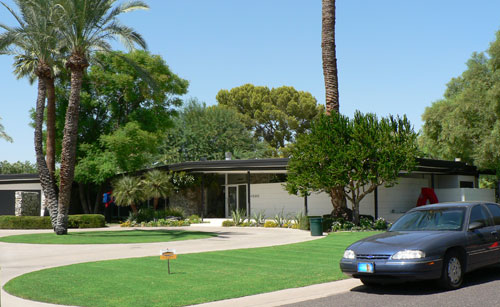 According to Roger Brevoort, Arcadia Camelback Mountain Neighborhood Association Zoning Committee member, the longer-term residents of the neighborhood are appalled and their concern for preserving Arcadia is increasing. He believes that “it will be ever more critical to promote educational efforts about the importance of community character and compatible design ... there is a crucial need for education about the role that the more significant examples of the modern movement play in the history of Arcadia and East Phoenix.”

Unfortunately, according to Debbie Abele, Historic Preservation Officer for the City of Scottsdale, the rate of loss has drastically affected Arcadia’s architectural integrity and historic designation may no longer be likely. When we tear down one unique home we have we lost irreplaceable features of our city’s visual appeal. Little by little Arcadia’s modern ranches are being leveled and replaced by homes speaking a completely different language, thus altering the essential story of Phoenix lore the neighborhood of Arcadia has to offer future generations.

To stem the tide, education regarding the importance of modern Arcadia architecture is needed, as well as education regarding proper renovation techniques for builders and homeowners to employ. If done correctly, new-builds and remodels could add (rather than detract) to the feel of the neighborhood and help maintain Arcadia’s character defining features. ©2008 Rachel Simmons

The David Wright home fell into the hands of a developer in 2012, and it took a great deal of effort to divert disaster.

Make a Ripple in the Pond

Phoenix is notorious as a teardown culture—ANY building can be at risk and modern designs are no exception. Modern Phoenix has assisted as a communication forum and media outlet for the preservation of both the Frank Henry Valley National Bank building site and for the White Gates residence by Al Beadle. We are ONLY able to succeed in these efforts IF WE KNOW ABOUT BUILDINGS IN DANGER! If we don't know, WE CAN'T HELP.

It is easy to feel helpless in persuading the actions of others. This checklist of small but significant actions will come in handy next time you become aware of an endangered midcentury modern property. Your action may have a ripple-in-the-pond effect. Will you be the hero brave enough to skip the first stone? Alison King Founding Editor ModernPhoenix.net 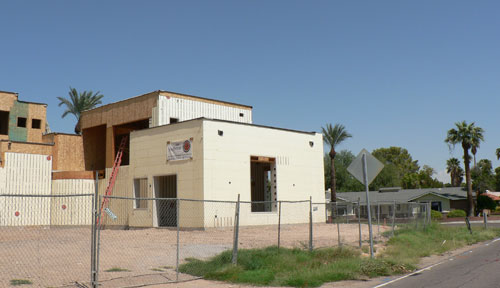 These new builds in the Arizona Country Club area near Arcadia illustrate how dramatically new multistory homes contrast to neighboring single-story ranch homes in both style and scale. 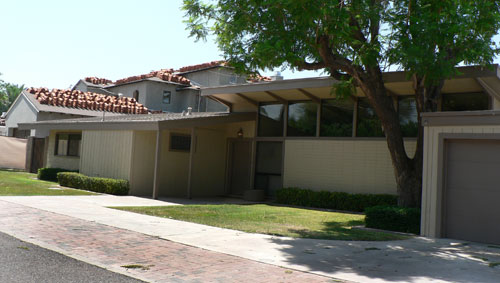